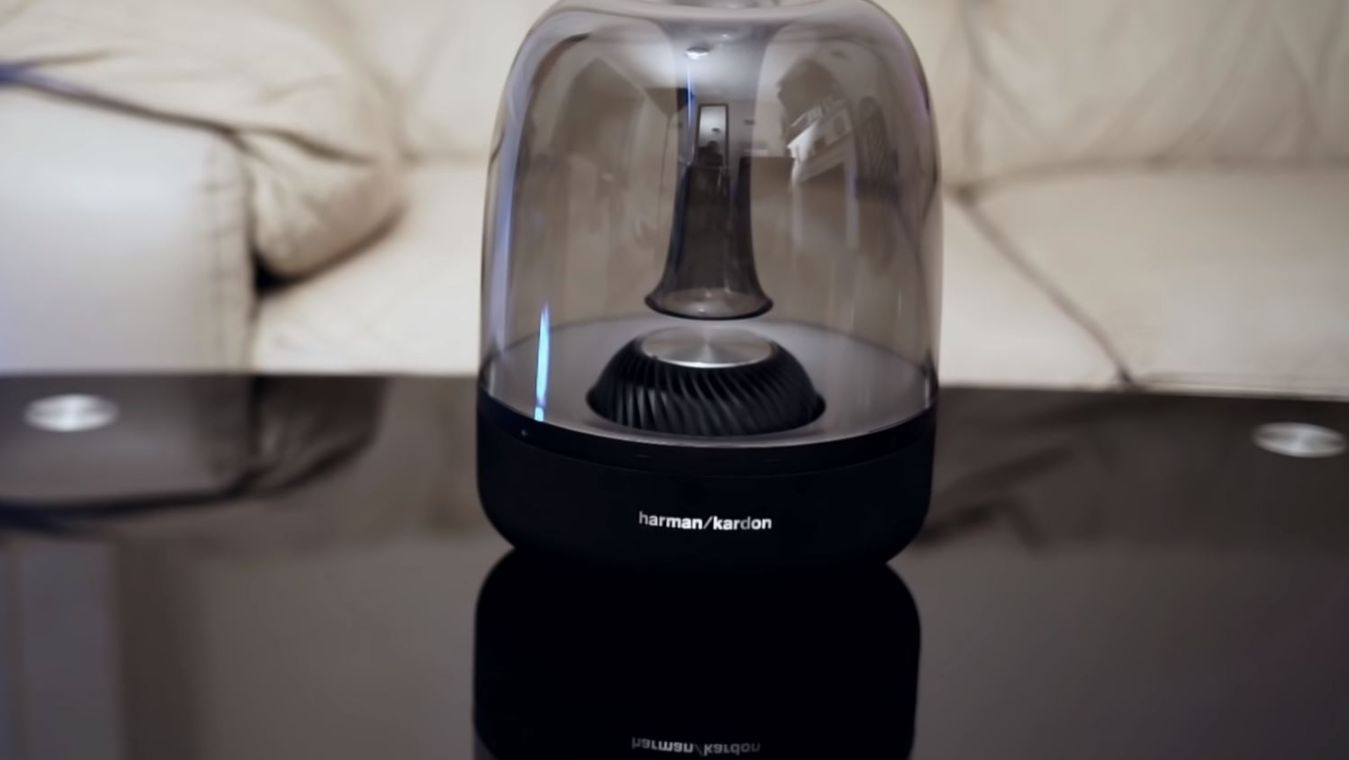 With iconic design, ambient lighting, and ease of use, Harman Kardon Aura Studio 2 delivers the high-quality Bluetooth audio streaming you’ve come to expect from a Harman Kardon product. With an animated light that glows up from the center turbine and a sleek tinted dome, your music has never looked better.

The Harman Kardon Aura Studio 2 bluetooth speaker looks as good as it sounds. This speaker stands on a transparent round dome and has lights that swirl around the base when turned on, giving an imposing appearance.

The Aura Studio2’s base has a very soft plush surface with the Harman Kardon logo on it, and both are stylish and delicate. Not only is its exterior aesthetically pleasing, but It also incorporates many acoustic technologies. For example, the transparent domed waveguide in front of the speaker contains an exclusive DSP technology developed by HARMAN.

Audio from these speakers goes through this dome which collects all sounds before they scatter outward 360° to fill any room at different volume levels without hurting your ears or disturbing anyone else around you.

The Harman Kardon Aura Studio 2 Bluetooth Speaker’s favorite design feature is its 360° LED light ring. Below the waveguide, there is a turbine-shaped filter with an inner circle of LED band lights. When playing music, the speaker’s lights not only rotate in a full circle but also dynamically change as per rhythm, setting up just enough ambiance for you to notice and enjoy it fully.

Not only do you get to listen while having fun dancing around your room, but this speaker also has another interactive device that goes hand-in-hand with it. An app (compatible with both iOS & Android) that controls lighting effects according to song choice or playlist selection can help you wirelessly control the Aura Studio 2.

Instead of being based on a typical speaker design, it was modeled after Harman Kardon SoundSticks. The 112mm subwoofer fires downwards against whatever surface you have them on and creates downward pressure while pushing sound pressure. In addition, six 40mm high/midrange speakers strategically located at the lower section create an immersive stereo experience.

The subwoofer of Sura Studio 2 has a moderate distance from the bottom, which is slanted so that you can place it on any surface and still get good low-frequency dispersion. As a result, the listener will enjoy an equally powerful bass effect throughout all directions, no matter where they are sitting in relation to the speaker.

AHarman Kardon Aura Studio 2 has a Bluetooth 4.2 wireless connection that will be faster, and the sound quality is also better. In addition, aura Studio 2 supports a feature called Wireless Dual Sound. It lets you connect two Aura Studio 2 speakers or other Harman Kardon products at once, so it can only imagine how great this would be.

The built-in microphone for phone calls allows hands-free calling, making conversations easier to manage with one-button action. In addition, with noise cancellation microphones, your call experience improves by removing echo and background noises from voice transmissions and reducing ambient sounds in the surrounding environment around you while communicating on calls.

The Aura Studio 2 Bluetooth speaker has three interfaces. On the left is an AUX 3.5mm audio interface that can connect with smartphones or computers. In the middle is a service port that connects via USB cable to your computer, and on the right side of this device are 5.5 mm power ports for use when you plug it into its original adapter (which comes included).

The Harman Kardon Aura Studio 2 speaker has a light touch switch that supports opening the lights with one press. When you turn on the speakers, there is a sound effect, and the LED light will be lit up at once when using this button. The design for these buttons is very user-friendly as it’s easy to use and makes operating quick too.

Harman Kardon Aura Studio 2 has a more bass-heavy and atmospheric sound than the previous model. The low frequencies are especially surprising for its small size, with a tremendous impactful presence extending very well to subwoofer territory. I believe this is partly due because Aura’s specially designed down-firing woofers provide such substantial contribution from below 50 Hz.

Compared against direct competitors, it adds up to an advantage when considering both amount of power output (Aura Studio 2 blows away most speakers at any price) and the depth/quality of extension on either end.

The midrange has a decent performance, and the transition between frequencies are tight. Its size produces enough information for the wireless sound system as a single unit, which is already satisfactory. The human voice portion sounds full, with slight emphasis accentuating female voices in particular. That also contributes to making them more transparent and delicate than usual when listening to music.

They can shine better through complex musical passages due to their higher density of representation.
As such, piano tones significantly benefit from these qualities because pianos require purer timbres that do not over-saturate or cloud up the instrument’s inherent tone quality like other instruments, so doing would render those same notes muddy instead (e.g., bass).

When listening to tracks mixed with wide-stereo sound, the effect is lost on a single unit of Aura Studio 2. However, it is possible to set up two units that play in left and right channels instead. The overall audio balance of the Harman Kardon Aura Studio 2 leans towards midrange frequencies which work great when you turn up the volume.

I was surprised at how well this speaker could play modern music. It didn’t crackle or distort even when the volume is turned up all the way, and it sounds very clear.However, I wasn’t a fan of using these speakers to listen to classical tracks; they lacked some precision that made them less appealing than pop songs, for example.

Harman Kardon’s Aura Studio 2 is a stylish and modern Bluetooth speaker that will stand out in any room. It comes with six high-midrange transducers for crisp, clear sound and one dedicated subwoofer to produce deep bass performance. This unique Bluetooth speaker also has a dual wireless connection so that you can link two speakers together for a more comprehensive music projection.

Are you looking for a unique Bluetooth speaker? The Harman Kardon Aura Studio 2 is perfect for home use to make the room look great.

Small, powerful, elegant and will attract plenty of attention. Everyone that has experienced the sound and has seen the unit in my apartment has inquired where they can get one. I almost regret ever purchasing other systems because the bass is so unbelievably strong and the music so crisp. I’ve previously owned a Denon 5.1 System and a Pioneer receiver. You will not be disappointed. I promise you.

Construction is solid – the clear plastic top is very clear, the base has high-quality fabric, and overall it’s solid. The base has a downward-firing woofer. and the inside has a ‘turbine’ with the midrange. There are a few touch sensitive ‘buttons’ and indicators on the beltline: power, Bluetooth connection, volume up and down, and a light control, and phone answer/hangup.