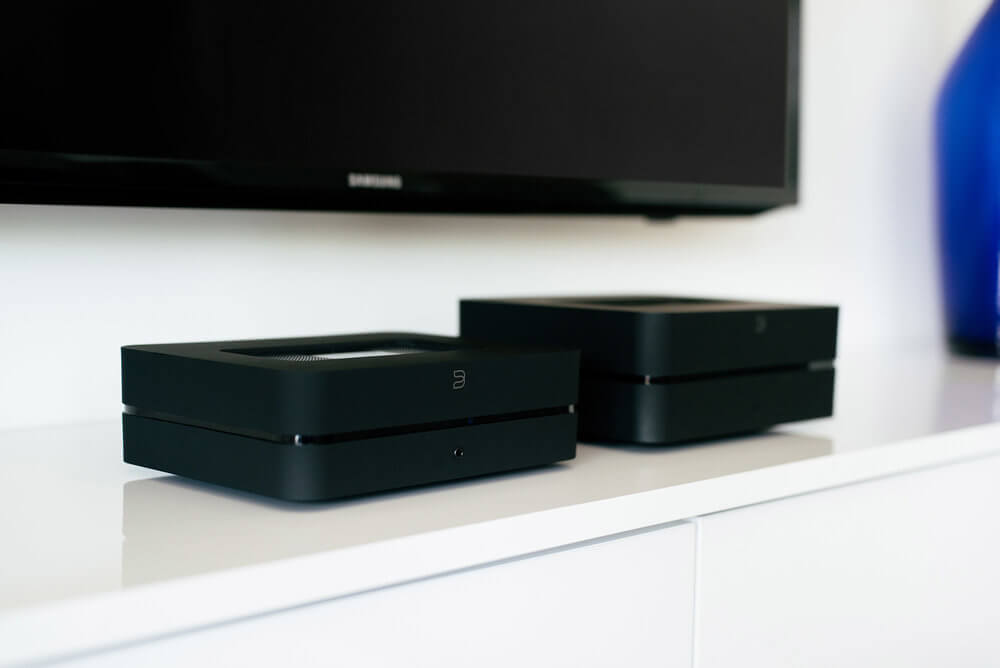 Bluesound upgraded its second-generation wireless streaming audio system, adding “i” to the model. The fully updated features include Alexa voice control, Apple AirPlay 2, and dual-band Wi-Fi. The full range of products includes three wireless speakers: Pulse 2i, Pulse Mini 2i, Pulse Flex 2i, and three streaming players: Node 2i, Vault 2i, and PowerNode 2i. Among them, Bluesound PowerNode 2i has the most comprehensive functions because it has the amplifier’s function. Just connect a pair of passive speakers to be a complete sound system.

PowerNode 2i is based on the streaming player Node 2i. It is an all-in-one product that integrates network players, DAC decoders, and front and power amplifiers. It inherits the BluOS network streaming core and 32bit/192kHz decoding strength DAC and adds a class D two-channel amplifier using HybridDigital technology, which can output 60 watts stably ( 8 ohms). The stable output power is no problem whether it is matched with bookshelf speakers or small floor speakers.

As an all-in-one product with multiple functions, the size of Bluesound PowerNode 2i is much smaller than a generally integrated amplifier. There is also a 1GHz ARM CORTEX A9 chip inside the machine for processing audio signal conversion and supports digital music files up to 32bit 192kHz. 2i also includes support for the latest MQA specifications.

PowerNode 2i is an Apple-like product for you, but it’s more affordable. The Bluesound power node 2i is a music streaming integrated amplifier. It is very much an Apple looking product, especially when you order it in white. It’s incredibly minimal and relies almost exclusively on you being comfortable with using your smartphone as its remote. It uses Bluesound’s app in order to get the most from its performance. The power node 2i can playback virtually any music format on the market right now, including MQA, which we enjoy through Tidal.

About the BluOS App

Bluesound is the audio brand that developed BluOS. Not to mention that you may not know that it has been established for only six years, but it has already occupied a place in the affordable digital stream market. Its products range from streaming players, amplifiers, wireless speakers to the favorite SoundBar of young people.

Due to the mature functions and comprehensive support of BluOS, all major digital streaming audio equipment companies use this software and become a member of BluOS audio products. It also makes it more and more compatible and can easily achieve a multi-room music system.

Network streaming is one of the core functions. Although streaming media services’ sound quality is not as good as the lossless audio shared by the LAN, it is better than the rich and diverse content. Users with mainstream streaming service accounts such as Spotify, Qobuz, Tidal, etc., can log in and operate the connection account directly in the Bluesound App. After it is displayed in the app, you can check the related service to browse and play the playlist, and you no longer need to log in to multiple different service apps. Rely on Wi-Fi to easily connect to the Internet to instantly get millions of music and songs.

How did it develop such a mature audio technology in a short period of time? It turns out that Bluesound, NAD, and PSB belong to the Lenbrook Group of Canada. This means that it can integrate NAD’s amplifier technology and PSB’s speaker manufacturing technology in many ways, coupled with its software technology. With BluOS’s streaming function as the main product design, creating a full range of naturally digital streaming audio brands.

Bluesound Powernode 2i also can access your music that may be locally stored on your network. Speaking of network, those smart home fans or enthusiasts will be happy to know that it is Google Home and Amazon Alexa compatible.

Although the Power Node 2i is a small one, the interface support is quite rich. This machine has a set of HDMI output interfaces and supports eARC/ARC functions to meet the customer’s habit of listening to music. In this way, you can have better sound quality when you watch TV shows, Youtube or Netflix, and other video content.

It can also transmit lossless music files of PC and NAS in the local network through 2.4GHz/5GHz dual-band Wi-Fi and can support up to 24bit/192kHz file playback. Suppose you want to use the traditional audio connection method. In that case, this machine also has digital inputs such as USB and mini optical fiber connected to a music server or CD turntable. Suppose you feel that the low-frequency sense of only connecting two channels is insufficient. In that case, this unit also supports subwoofer output, allowing you to connect 2.1 channels to enhance the low-frequency sense so that players in small audio-visual spaces can also use smaller main channel speakers. Easily have a complete sound quality performance, serve as the centerpiece in any connected home theater environment.

When listening, I first connect Powernode 2i to Dynaudio’s two-channel bookshelf speaker Evoke 10 and use Tidal for streaming. When the system is turned on, the author can hear the unique and bright high-frequency performance of Dynaudio Evoke 10, but it is a little warm in the middle frequency part.

I tried several tracks in a row. What is certain is that with the tuning of Bluesound, Dynaudio can hear transparent, condensed vocals, solid and flexible low frequencies, and clear and vivid high frequencies, which are equivalent to the personality of this pair of speakers. It is fully displayed and has a reasonably good resolution. When listening to classical music, the instrument’s shape is condensed, and the layers are visible.

In order to test the real strength of Powernode 2i, I used it with Dynaudio’s Emit 30. Unexpectedly, this small and small integrated amplifier can push the pair of three-tone speakers differently, and each frequency band has a good performance.

When listening to Amanda Palmer’s album “There Will Be No Intermission,” you can hear the female singing condensed in the center of the two pairs of speakers. It sounds soft, moist, and even a bit of NAD. It is a delightful sound. In the musical instrument part, the accompaniment’s piano keys are distinct and play smoothly and quickly. The sound of the bass drum embellished in time is quite flexible and solid, and the whole album sounds quite good.

Then listen to the album “Between The Sheets” of the jazz group Fourplay, and you can also hear the reliable, flexible, and full jazz drum sound, even if the performance of the big dynamics is not soft. The piano keys retain the same adjustable picture. The treble characteristic of Powernode 2i makes the keys more obvious. This characteristic is also audible when the guitar is plucked. The overall picture feels perfect and very vivid, making people can’t help but swing to the rhythm when listening.

On the whole, Bluesound Powernode 2i is dynamic, which is very suitable for music fans who like to listen to lively music. Its high frequency is bright, the middle frequency is soft, and the low frequency is solid and flexible. It can be said to be particularly exciting for listening to jazz and pop music. It is worth mentioning that the resolution of Powernode 2i is perfect, through which you can hear the subtle arrangements in the track.

The Powernode 2i is an integral part of the Bluesound ecosystem that unlocks a world of high fidelity streaming. As a high-resolution streaming music amplifier, the power node connects directly to your existing speakers providing unlimited access to streaming music services and your local library. The power node 2i is a sophisticated 60-watt integrated amp, capable of handling even the most demanding speakers. Its high-quality DAC makes the best of your music no matter the source. Connecting to your home network is easy using dual-band Wi-Fi or gigabit ethernet. Having control over all this is easy with The BluOS Controller app. featuring dual optical analog inputs, a headphone jack airplay two, and 2-way Bluetooth, the power node has redefined the HiFi system for the modern world.